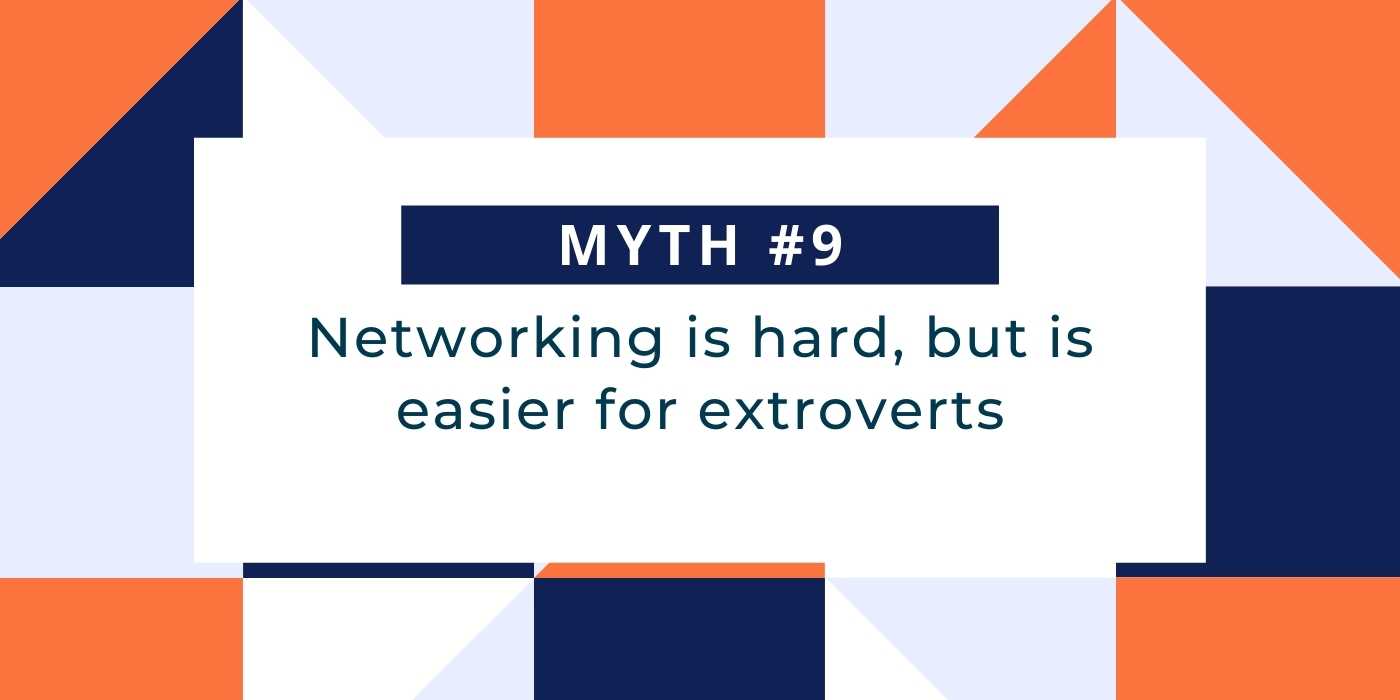 Myth #9: Networking is hard, but is easier for extroverts.

Reality: Networking sounds foreign and disingenuous to most people.  However, getting to know people who have advice and perspective is extremely important and valuable to you.  The more people you know who also want to help you, the better.  Networking can be done in so many ways.  And, it’s important to recognize that it takes time and effort.  Your efforts compound over years.

So many students look at networking as something foreign and unnatural. So many are not even sure what it is. Having to sell yourself can feel really daunting, so don’t think of it that way. Networking is not about setting yourself up for some deal or offer down the line, rather the goal should always be to make a lasting connection with someone that you can build upon over time.

Just the word “networking” can cause some people to tense up with fear and if that’s you, breathe. Don’t focus on the crowd in front of you, just focus on why you’re there. The only goal is to make one or two meaningful connections and that’s it. A fun trick is to try and make the room smaller, like by picking out a table with only one or two people at a time.

Come with some questions

It can be really hard to break the ice so it never hurts to have a few opener questions in the bag.  They don’t have to be anything special, just some icebreakers to get over the introductions. Asking about how they reached where they are in their career is a solid go to since people don’t have many chances to tell their story. If you want to get a little more personable then ask about their favorite sports team or tv show. If you’re feeling risky you can try and bring up some recent headlines to talk about but make sure not to turn anybody away with your topics.

Don’t obsess over what you think you did wrong

Sometimes you’ll slip up or think you said something wrong but you shouldn't let it define the event. Most likely, no one cared or even noticed your perceived mess-up. You’re going to be your own worst critic and beating yourself up over a fumble is not going to make you feel any better. Focus on what you did well and what you can actually improve upon instead of focusing on a lowlight reel of the last two hours. This will allow you to see where you excelled and to look at your performance objectively. Everyone has somewhere they need to improve. The trick is to focus on how you can improve and not what you regret most.

If you’re worrying about an event or a meeting constantly then take the time you’d spend freaking out planning out instead. Work through some questions you want to use, do a little preemptive research into who’s going to be there, or even write down some goals for the event such as questions you want answered. This prep work will help you address what’s keeping you up rationally and with a thought out plan instead of allowing for it to take over.
‍

Want all this help - and more -to fit in your pocket for on-the-go resources? Download our PathMatch app today!

3 Time-Management Tips for the Busy Intern