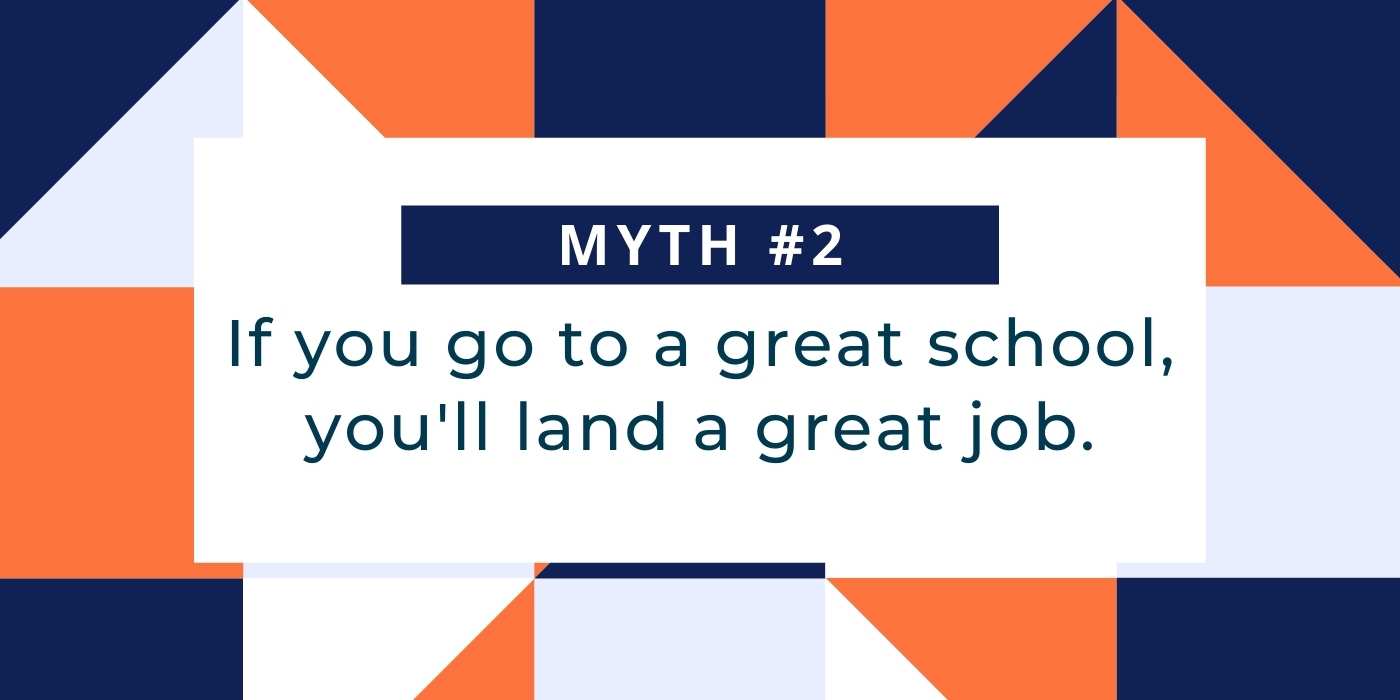 Reality: Great schools have great alumni and look good on a resume.  But a great school with no relevant experience on your resume won’t get you anywhere.  You’re still competing with other students from other great schools for jobs.

The reality is, while great schools may have great alumni networks and look good on a resume, having a great school on your resume with no relevant experience won’t get you anywhere. You’re still competing with many other students from many other great schools for jobs.

Let’s take two college students from the San Francisco Bay Area as examples. To give some background, the Bay Area is widely considered to be a major hub for technology, innovation, and entrepreneurship with companies like Google, Salesforce, Twitter, and Airbnb among their ranks. This has made it a common destination hotspot for those looking for jobs after graduation. In other words, the job market there is highly competitive.

A large reason for the Bay Area being the innovation hub it is today is that the region also serves as a backdrop for some of the country’s best universities, like Stanford and UC Berkeley. Both schools consistently rank amongst the top 25 in the nation, and it is an impressive feat just to get in. But keep in mind that the combined undergraduate population at these two schools alone totals 38,000 students, and that each student we are about to examine represents one of many.

Student A is a senior at Stanford University a half-semester away from getting his B.A. in Economics. He has a 3.94 and has courses such as Decision Modeling and Behavioral Economics under his belt. He also completed his thesis research project for which he performed Data Analytics in R to make statistical projections and forecasts. Outside of class, he worked as a dog walker, barista, and lifeguard to make some extra cash. He is not entirely sure what he wants to do upon graduation, but he does know he likes working with numbers and that he is good at it.

Student B is a senior at UC Berkeley, also a half-semester away from her bachelor's degree in Economics. She has taken many of the same classes as Student A, but has a slightly lower GPA of 3.51 from Cal. The major difference between the two students is that Student B has known what she wants to do since her freshman year and used this end goal to guide her extracurricular activities and decisions. She has explored her desired career path in-depth to confirm it’s the one for her and has held data-related internships all four years of her college career. Through these internships, she was able to start building hard skills needed for her career, like SQL and Tableau, while she was still completing her GE requirements. She has also developed important soft skills along the way such as timely communication, ownership of her decisions, and problem solving under pressure.

When a company or recruiter looks at Student A, they are able to infer that he is smart and driven enough to get high marks in his classes and graduate from Stanford. But that doesn’t set him apart from the rest of the resumes that all say the same. What does he bring to the table? He says he’s good with numbers, but is he good with numbers outside of a classroom, like in a corporate setting with deadlines and actual stakeholders involved? Furthermore, if he has never held an office job or done anything to pursue a certain path, how can either he or the employer be sure a position is the right fit for him?

To be completely frank, companies won’t even give Student A’s resume a second glance. They have dealt with too many recent grads who are aimless and spent too much time and money teaching them skills needed for the role.

That’s why companies look for candidates like Student B, who, although with a lower GPA from a lower-ranking school, has proven her worth and determination through multiple previous internships and has come highly recommended from her former employers. There would be far less training time and costs for her, as she already has experience in the industry and field. There is also a much lower likelihood of employee turnover due to her knowing what she wants to do and already being acclimated to work life and all it entails.

Whether you’re at an Ivy league, a big state school, or a small local university, your college years are more than just a time to take classes and study for tests. You’ve been doing that all your life.

Your time in college provides you with the opportunity to explore career paths, develop both your hard skills and your soft skills, and gain internship experience to prove the range and strength of such skills. If you’re at a highly-ranked school, congratulations, you have somewhat of a head start. If you’re at a lesser-known school, you still have the chance to get ahead. Either way, PathMatch can help you take advantage and be the one that lands a great job.

Want all this help to fit in your pocket for on-the-go resources? Download our PathMatch app today!